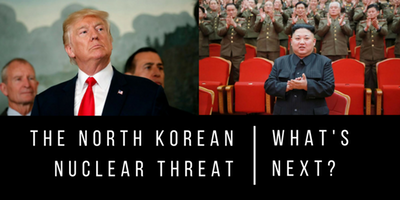 Fire, Fury and the Nuclear Threat
Join the World Affairs Council of CT and an expert panel to explore the central questions: why is North Korea a critical problem and what can the United States and its regional allies do to solve this crisis?
Featuring

Moderated By
Greg Boyko, Honorary Consul General of Japan in Connecticut
Melanie Kirkpatrick,
Writer-journalist and a senior fellow at the Hudson Institute; author of Escape from North Korea: The Untold Story of Asia’s Underground Railroad, published by Encounter Books. From 2006-2009 Melanie was deputy editor of the editorial page at The Wall Street Journal. Melanie spent 10 years in Asia, working for The Wall Street Journal Asia in Hong Kong and, prior to that, for a division of Time-Life Books in Tokyo. She received the 2001 Mary Morgan Hewett Award for Women in Journalism from the Friends of the East-West Center in Honolulu.
Jack David,
Senior Fellow of the Hudson Institute; former Deputy Assistant Secretary of Defense for Combating Weapons of Mass Destruction and Negotiations Policy (2004 – 2006); Co-Chair of the North Atlantic Treaty Organization’s Senior Defense Group on Proliferation. From 2002 to 2004, Jack served as United States Chairman of the Permanent Joint Board on Defense, Canada-US, to which he was appointed by President Bush. Jack was awarded the Secretary of Defense Outstanding Public Service Award.
Terence Roehrig, Ph.D.,
Professor of National Security Affairs, Director of the Asia-Pacific Studies Group, U.S. Naval War College. Terence has been a Research Fellow at the Kennedy School at Harvard University in the International Security Program and the Project on Managing the Atom and a past President of the Association of Korean Political Studies. He has published several books and will be publishing the forthcoming book entitled Japan, South Korea, and the U.S. Nuclear Umbrella: Extended Deterrence and Nuclear Weapons in the Post-Cold War World with Columbia University. He has published numerous articles and book chapters on Korean and East Asian security issues, North Korea’s nuclear weapons program, the Northern Limit Line dispute, the South Korean Navy, deterrence, the U.S.-South Korea alliance, human rights, and transitional justice.

Reception to follow event. Featuring meet-and-greet with guests and speakers and a cash bar.